Almost every person arrested for DWI in Texas is asked to do Field Sobriety Testing. The standard tests are walk and turn, one leg stand and HGN. Most police officers get trained on those tests when they go to through their initial training. Some take refresher courses, but that's no longer required. There is no certification - you simply need to complete the course.

Most prosecutors and the police sell these tests as "scientific". You can't really fault them for that - that's what they are taught. Unfortunately, most lawyers don't know what they are taught, and they are left learning about it through other sources, such as continuing education programs.

I recently attended - and completed - an NHTSA certified training course. As a result, I would now be considered qualified to administer FST's. Even though I knew a lot about the tests, and the underlying basis for them, to say it was eye-opening is an extreme understatement. For starters, I learned the conditioning that is part of the course curriculum - which is the same for every course. Some might call it brainwashing - and you wouldn't be too far off. No one - even defense lawyers - condone drunk driving. After all, we drive the same roads as you do. However, not every person who has something to drink is intoxicated. 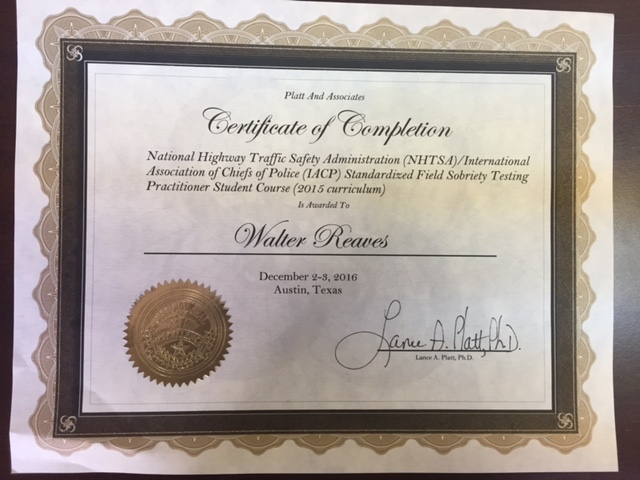 The other revelation is how little time is devoted to explaining the basis for the testing. They are simply called scientific and supported by studies. No time is spent explaining the studies, or where the tests came from. While the accuracy is mentioned - which is far less than 100%, it is not really discussed. That's where we have a leg up on the police - a good defense lawyer is going to look at - and analyze - the studies. None of them are peer-reviewed, which should tell you something, and they aren't likely to be.

One of the benefits of going through the training is learning how to conduct the tests. There are specific ways to do them, and you have to do it perfectly. Just knowing that was worth the two days I spent in class.

If you're charged with a DWI, you need to be able to analyze the case from the beginning. In a sense, the "papers" of the police get graded by the courts. Unless you know how to conduct the tests, you don't know how to grade.

This is simply one part of handling a DWI case. There is still the breath test or blood test, which also requires "inside knowledge".