Convicted with bad forensics, or junk science - What can you do?

Many people are surprised to learn that Texas leads the nation in how it deals with the use of forensics in criminal cases. We were the first State to establish a Forensic Science Commission, whose goal is to examine cases where errors have been made, and make suggestions on how to avoid the same errors in the future.

The Texas Court of Criminal Appeals has also been at the forefront in addressing these issues. From a legal perspective, the problem with scientific evidence is that everyone may believe it is accurate at the time, but later developments prove it wasn’t. In other words, it’s nobody’s fault that false testimony was presented.

Due Process Violation for the Use of False Evidence in Texas

A defendant has always been able to obtain relief if perjured testimony (a witness lied) was presented at trial, but to meet that burden, you had to prove that it was done intentionally, or with the knowledge that the testimony was false. That is usually not possible with scientific testimony, because everyone believes it is accurate at the time. In other words, you can’t commit perjury if you don’t know you are lying.

Arson may be the best example of this. For years, fire investigators testified about things like pour patterns, and how fast a fire burns. Much of that was based on their training, and not the application of scientific principles. When fire scientists (i.e. not arson investigators) started looking at the testimony used in criminal cases, they quickly saw it was not scientifically valid. It is now recognized that most of the testimony offered in the past was not accurate, but no one knew that at the time. As a result, a defendant could not meet the legal test for perjury.

The Texas Court of Criminal Appeals fixed this problem in a case styled Ex Parte Chabot, 300 S.W.3d 768 (Tex. Crim. App. 2009) There the court held that the impact of false testimony in a case is the same whether the State knows about it or not. Therefore, the Court held a defendant could establish a due process violation when false testimony is used to obtain a conviction, even if the State was not aware the testimony was false. To date, we are the only State that has recognized that right.

The claim in Chabot was based on the testimony of an accomplice, who testified that Chabot was the only person who sexually assaulted the victim and that he was in the other room when the assault was committed. Subsequent DNA testing established that the accomplice was, in fact, the one who sexually assaulted the victim, and there was no DNA evidence that established Chabot did so. Therefore, the accomplice’s testimony was false. Under a traditional analysis, the defendant could not establish a due process violation because the prosecutor didn’t know the accomplice was testifying falsely. The Court changed that and held it was still false, even if the State didn't know it was false.

Obtaining relief – you have to prove harm

Just because you can prove false testimony was used in a case doesn’t mean you are going to win. The law requires you to establish harm, which means the testimony had some impact on the verdict. The test for obtaining relief can vary and depends on several factors.

The Court in Chabot held that the test for reviewing the unknowing use of false testimony is the same as that for the knowing use of perjured testimony; the defendant has the burden to prove by a preponderance of the evidence that the false evidence contributed to his conviction or punishment.  In Ex Parte Chavez, 371 S.W. 200 (Tex. Crim. App. 2012), the Court framed the question as to whether the testimony was “material”, which focuses on whether there is a “reasonable likelihood” that the false testimony affected the judgment of the jury.

We will talk later about what that means, and what you need to prove to obtain relief.

Even with the expansion of the due process claim, there were still cases where an expert’s testimony had changed, but the defendant could not obtain relief. The legislature responded by enacting Art. 11.073,  of the Texas Code of Criminal Procedure. That Statute now allows a court to reverse a conviction when there is “relevant scientific evidence” that was not available to be offered at trial, or contradicts scientific evidence relied on by the State at trial.

So what does that mean in layman’s terms? Basically, it means that if you can prove the scientific evidence used at trial was not accurate, you may be able to get your conviction reversed.

Art. 11.073 was first construed by the Court of Criminal Appeals in Ex Parte Robbins, 478 S.W.3d (2016). The medical examiner, Patricia Moore, testified at trial that the victim’s death was caused by asphyxia (strangulation), and the death should be ruled a homicide. Following the trial, the case was reviewed by several medical examiners, who expressed the opinion that the cause of death should be changed to “undetermined”.  Moore also reviewed her original testimony and concluded that she could no longer support her original finding, and would now classify the cause of death to be undetermined.

The Court had to decide on an initial question based on the way Art. 11.073 was worded; that question was whether the change in scientific knowledge should apply to the scientific knowledge of the individual. In other words, does it apply when the original expert changes their mind? The Court answered that in the affirmative and held that since Moore’s “scientific knowledge” had changed since the time of trial, Mr. Robbins was entitled to relief.

There was something else important about this case, which you probably picked up on from the word “undetermined”. The new opinion wasn’t that Mr. Robbins was innocent; he could still be found guilty even if the official cause of death was listed as undetermined. This points out an important fact: a defendant can have their conviction reversed even if the new evidence doesn’t establish their innocence. The issue is whether the new evidence could have made a difference in the original decision. In other words, would the jury have found him guilty beyond a reasonable doubt if the State could not have proved through medical testimony that the death was the result of an intentional act?

If you've been convicted based on the use of junk science, or you want to know more about this, get a free copy of our book Freedom Through Science - A Guide to Attacking Junk Science. If you want to see whether we can help you, please fill out the contact form on this page, or give us a call at 254-296-0200. 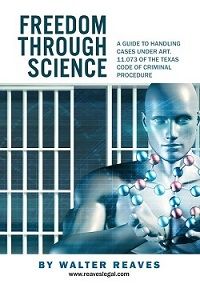